Cristiano Ronaldo was today named the FIFA World Player of the Year at a star studded gala in Zurich. Last seasons return on 42 goals, the Premier League title and Champions League victory was enough to elevate Ronaldo into the record books as the first Premier League player to win the prestigious award. Many believe that it should have been Barcelona’s Lionel Messi that should have won the title, but Ronaldo did enough to take the title and leave Messi as runner up. Ronaldo received the award from Pele, and said: ‘It is an overwhelming moment and a very special moment in my life and I would like to say to my mother and sister that the fireworks can be set off now. I’m extremely happy, it’s one of the most important moments in my life and I hope I can come back.’ 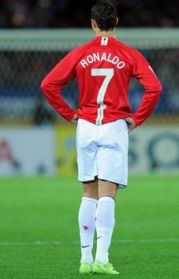 Ronaldo currently wears the Nike Mercurial Vapor IV Citron. There are several types of the Citron cleats available that have different things to offer at different prices. The Nike Vapor SL Citron is the most expensive in the range at over $300. Crafted almost entirely of carbon fiber, (the revolutionary material used in jets that offers unbelievable strength with incredible lightness) it took Nike three years to design and produce this incredible version of the Vapor. The second is the Nike Mercurial Vapor IV Citron, which Ronaldo wears. The upper is made of soft, supple Teijin synthetic leather that adjusts to the shape of your foot. The covered lacing system leads to increased strike zone. Another excellent option is the Nike Talaria IV Citron, especially since it is priced under $100. Lightweight Teijin KNG-75 synthetic leather is used in the upper for excellent ball feel. For less than $100 its a good option.