After the release of the F50i a few weeks back, Adidas have put together a pretty sweet kit that 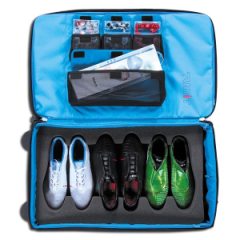 includes 3 unique TUNiT uppers….and if you have an extra few hundred $$’s lying around it is worth it! Not only do you get the three uppers, but you also get Firm Ground, Soft Ground, Hard Ground and Street Sole studs that allow you to decide where you wear your cleats. So, in theory there are 12 different ways you can style these cleats! This all comes in an adidas duffel bag and is packaged in a nice rolling suitcase.

The 3 uppers include 1 SPRINTSKIN microfiber, 1 ClimaCool microfiber, and 1 ULT-K Leather. And just so you know, the 3 different colored uppers are only available in this kit; only people that buy this kit will have any of them. The uppers also have different weights; 10.2 oz for ClimaCool version while the ULT-K and SPRINTSKIN versions weigh  11.2oz. The F50i has been extremely popular since its release. Lionel Messi debut the Cyan/Running White/Black version  in the Champions League final for Barcelona in 2009. The F50i runs true to size with the sole fitting a little bit larger than the Copa Mundial. With this whole kit costing just under $400 there will not be many people that choose to buy. If you decide to purchase it, ‘Congratulations’….looks like you have money to burn, and you will be one of a limited number of people wearing this limited edition kit!

Adidas has released their next generation of speed in the X SPEEDPORTAL, using Rick and …